Recurve Bow VS Compound Bow: The differences and special features of the individual types are described and explained below. But wait – what is a recurve or a compound bow? Just read on, and you will learn. 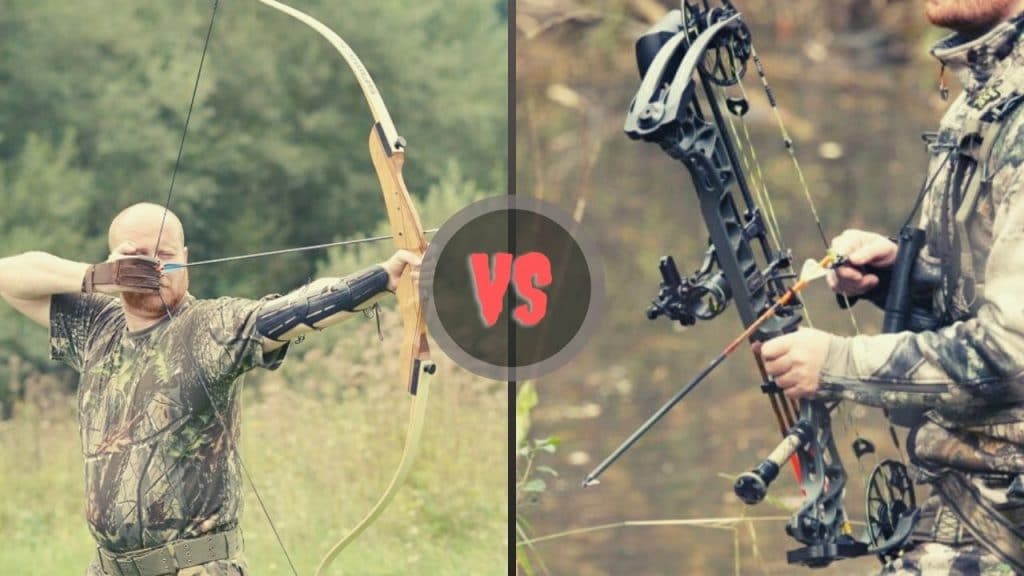 The Recurve Bow or Olympic Bow

The recurve bow is a technical advancement of the longbow. It is also known as the “Olympic bow” because only this type of bow is represented at the Olympic Games.

Its shape is characterized by the fact that the ends of the limbs are bent forward towards the target. This bend results in a significantly higher firing speed and precision compared to the longbow, even with lower draw weights.

But that’s exactly what makes recurve shooting so interesting. You practically never stop learning, and you get better and better with continuous training. And if you train hard, you will be rewarded more and more often with the feeling of having fired a “perfect shot.”

You Should Read: The 10 Best Takedown Recurve Bow for Hunting

The compound bow is the latest development in archery and, how could it be otherwise, comes from America. It was mainly developed for hunting because there it can best exploit its specific advantages, to name just a few:

Compound Bows Differ Fundamentally From Other Bows in Their Structure

They have pulleys on the limbs, whose mode of action can best be compared to that of a cable pull. These pulleys, also called wheels, cams, or speed cams, have the advantage that the bow does not have the full draw weight when it is fully extended, like a recurve bow.

They have “rear sight and front sight,” only with archery. It is called “peep sight” and “scope.”

Of course, there are also purists among compound shooters who shoot completely without the aids, as mentioned above. These are so-called compound bare archers.

You Should Read: The 10 Best Arrows for Recurve Bow

The Advantages of a Compound Bow Are Therefore Obvious

All of this is very beneficial in hunting shooting, and there is also better handling of the bow because compound bows are significantly shorter than all other constructs.

Recurve Bow Vs Compound Bow – Which Bow is the Right One?

The question of which bow is right for you is ultimately an individual decision. It depends on how much experience you have and how much time and money you are willing to invest in your new hobby.

A recurve bow is certainly advisable to get started. It requires little maintenance, offers high precision, and can be shot at all levels of performance. However, there is still no alternative.

There are still many things to add about technical features such as turning the string in or out, lengthening or shortening the cable, selecting and synchronizing the roles, only that would go beyond this homepage’s scope.