How to Choose a Night Vision Scope: Hunting at night differs from standard daytime shooting. by requiring more experience and the availability of specialized devices. Animals that lead life after sunset are better oriented in the dark, which is the main interest to hunters. At night, without devices, it is difficult to assess or track the animal. Night vision devices come to help. 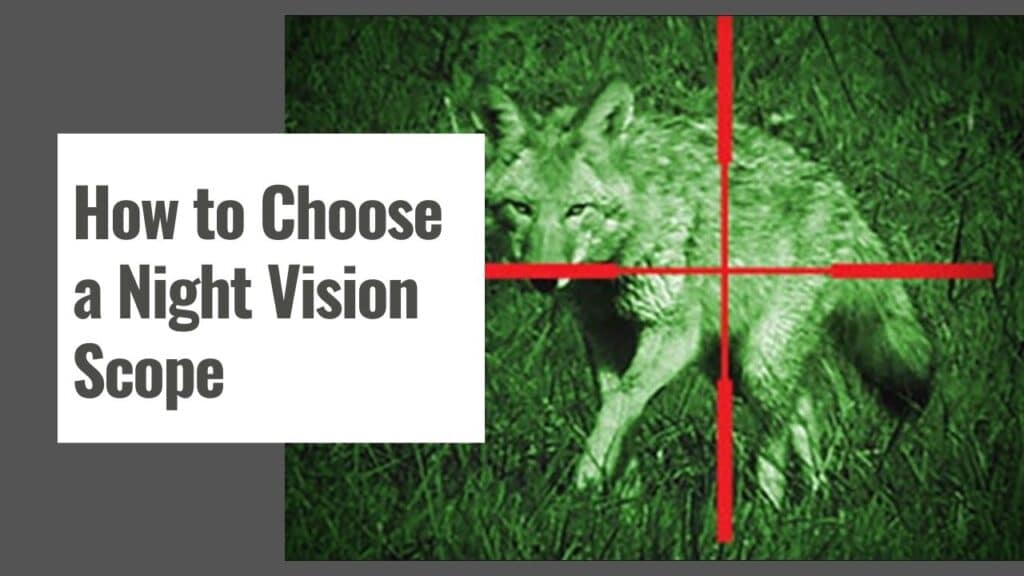 How do Night Vision Scopes Work?

Everything that we see appears as a reflection of solar or artificial rays from objects. There is no sun at night, but this does not mean that there is no reflection. In most cases, the moon, stars, reflected light from clouds helps to see objects. In the absence of such, auxiliary illuminators are used. Visible light sources, such as under-barrel lights, make it easier to find but do not provide camouflage for the hunter.

You Should Read: What is Eye Relief & How Does It Affect Scopes & Rangefinders?

How to Choose a Night Vision Scope

A cheap Night vision scopes are capable of capturing even weak reflections and amplifying them. The work is based on sensitive converters that convert photons into an electronic or digital signal.

Night vision scopes are divided into two types of transducers:

1. Sights Based on an Electro-optical Converter (EOC)

The converged photon beam knocks electrons off the cathode. Electrons are accelerated by applying a voltage to them and are fixed on the screen with a green glow. The greater the photon’s momentum, the more the electron accelerates, and the brighter the glow.

2. Digital Sights Based on a Sensitive Sensor

The converged photon beam hits the photocell, from which the intensity values ​​are collected. Electronic processing increases the brightness parameters, and the display shows a picture.

During the day, due to the infrared spectrum of the sun’s rays, a person is able to distinguish colors, and at night it all comes down to a monochrome image. The green color in devices with an image intensifier is explained by the phosphor’s glow when electrons hit it, black and white in digital sights – using the corresponding display. There are phosphorus deposition technologies to create black-and-white electron-optical converters. According to hunters, the usability of one and the other type of display is comparable in the same way:

The human eye can recognize about 400 shades of green, so the observer better recognizes the surrounding area, and with a black and white image, the contrast between the target and the background increases. Therefore, the hunter himself decides which image suits him. The glow color does not affect the recognition range, but the corresponding colors complement the image in winter and summer:

You Should Read: How to Choose the Right Reticle for Your Rifle Scope?

4. How Does the “Fear” of Exposure Affect the Choice?

One of the main problems in the budget segment of night vision devices is the ability to illuminate the image intensifier. This problem arises for devices with 1st generation image intensifier tubes. With sufficiently bright lighting, for example, in the daytime, the amount of light is in excess, and the devices, according to a given algorithm, increase the speed of electrons, which leads to oversaturation and failure of the phosphor.

5. Choosing a Night Vision Sight Depending on the Cost

The price category is immediately worth noting the difference in the cost of the first, second, and third generation. The differences in image intensifier tubes are related to internal components and sensitivity, which leads to differences in observation distances. The first generation is suitable for shooting at short distances of up to 100 meters, is often used by beginners, and is the cheapest. The second and third generations detect a target at distances of up to 300 and 500 meters.

The concept of impact resistance is directly related to the display of the reticle. In the sights with image intensifier tubes, as well as in optical sights, the reticle is engraved on a separate spring-retained lens. The worm mechanism of the fastening provides movement of the lens in two directions – horizontal and vertical.

When fired, the recoil load is transferred to the spring supporting the lens to return to its original state. Each scope has certain durability. Most of the first-generation devices are suitable for rifles with muzzle energy up to 3700 J. The special case of installing “night lights” on smooth-bore weapons implies the use of more stable sights that can withstand over 4200 J (.12 caliber). These scopes include the Dedal-180HR.

The 2nd and 3rd generation units are designed with powerful recoil in mind. The aiming mark in digital devices is shown on display. They do not have lenses with a spring system, which means that recoil’s impact does not play any role for them, provided that all internal elements are firmly fixed in the housing.

You Should Read: Single Pin Sights VS Multiple Pins

7. Choice of the Reticle

From the previous paragraph, it can be understood that only one variant of the aiming reticle is a possible insight with an image intensifier. The electronic components of the digital devices and the display allow you to change the types of nets depending on the animal’s firing range, size, and behavior.

It should be noted that the sighting in digital sights is carried out by the coordinate method, which is used to memorize the sighting positions of several guns. The distances are small at night, so the grid’s most common variant is “cross” or “half cross.” If shooting at a distance at which a bullet drop is noticeable, then grids with correction strokes are selected.

8. Impact of Custom Functions on Choice of Night Vision Scope

The software of digital sights increases the number of functions in comparison with scopes with analog sights with an image intensifier. For example, the Digisight series digital scopes have single-shot zeroing, video recording, and mobile device connectivity. Sights with image intensifiers can only be opposed by a color change and the degree of brightness of the aiming mark.

9. Choosing a Night Sight for Hunting

It is worth noting that the distances at which shooting is usually conducted during the day should be reduced at night in order to be a more confident inaccuracy. Walking in the dark on rough terrain in search of a wounded animal is a difficult task.

At night, they often hunt from towers and storage sheds with a long wait for the animal to come out.  Depending on the animal’s behavior and range, the type of area is divided into two main ones – a forest and an open field. Since night vision scopes require lighting, branches, and foliage of trees interfere with viewing, as they block the light from the moon or stars.

Hunting in the woods requires additional lights or more sensitive sights. In open areas, under the same conditions, the image brightness is higher. Trees in the forest limit the observation area.

Therefore, the multiplicity of night sights in the range from 2 to 4 times is considered sufficient. For aiming in open areas, it is more convenient to use sights with high magnification. This is achieved with large diameter or digital zoom lenses.

The larger the lens, the more light passes through it, which means that the image will be brighter, but such a sight will be more weighty. In addition to the lens, the recognition range depends on the generation of the image intensifier. Digital sights have high magnification rates and 3rd generation sights in range.

You Should Read: The 10 Best Single Pin Bow Sight for Hunting

As a result, the hunter approaches the issue of choosing a night vision scope based on price and quality criteria. For most tower shooting, first-generation scopes are chosen because of the suitable shooting ranges.

For powerful calibers up to 6000 J, for example, .12, they buy a Dedal-180HR or a Yukon Sightline digital sight. For open areas within 200-250 meters, the first generation will not be enough, and hunters buy digital sights or the 2nd generation.

A modern and practical digital camera – Digisight Ultra. The second-generation introduces the Pulsar Phantom to series with different types of lenses and magnification. The third generation, due to cost, is less often used for hunting.

More often, the use of such scopes is associated with special services and security organizations. But if you have a desire to buy a night vision scope for hunting with a 3rd generation image intensifier tube, then the best choice is the Dedal-NV series.

When choosing a sight, first of all, consider the firing range and recoil of the weapon, then consider the functions of the device and compare the budget with the latter.