Crossbow VS Compound Bow: Today, we will look at the differences and similarities between a compound bow and a crossbow. We will compare and contrast the different features and benefits of each that will allow you to decide on which weapon you want to carry into the field this session.

However, the goal of this article is not to declare a winner on which weapon is best. Because ultimately, it’s up to the personal decision of the hunter that’s going into the woods which one suits their hunting styles and needs the best.

But what we are going to do today is take a look at a lot of the different features and see how they differ from each other and which one is better than the other. So let’s get started. 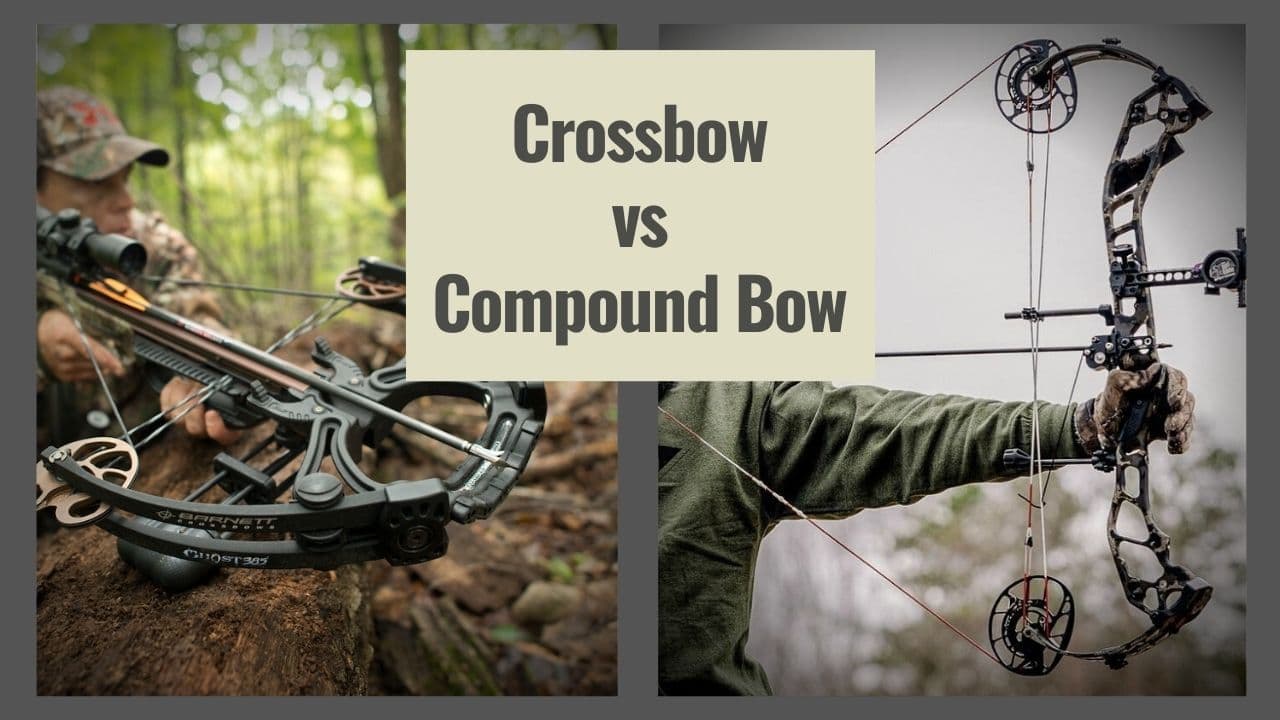 Weight is one area that a compound bow is undoubtedly going to outshine a crossbow. The weight of the beginner’s compound bow is about 25 to 30 percent less than a crossbow weight. So they are a bit lighter to carry around the woods with you.

There’s no doubt about it that the crossbows are suitable for ground blinds or hunting off the ground. But the compound bow also outshines the crossbow.

When you shoot a compound bow, it is significantly quieter than a crossbow. Crossbows produce a lot more power and speed, which comes at the expense of a lot more noise.

However, today’s crossbows are significantly quieter than they were in the past. Because now they have a lot of string dampening and silencing on them. But, crossbows are still considered louder than compound bows.

A crossbow is a single-shot weapon. It’s going to be very difficult for anybody to re-cock that bow and get an arrow on it quickly without a lot of movement. So, in terms of the ability to take a follow-up shot, we’ll give the nod to the compound bow.

Usually, crossbows get cocked and loaded when you get to your stand or get to your ground blind. So, you are not required to draw them back before shooting the animal.

It’s one of the big things that the opponents of crossbows cite as a reason. They shouldn’t be allowed in bow season, whereas your compound bow or even a traditional bow.

The physical act of drawing the bow back and having to shoot at your target creates an opportunity for the animal to see you.

However, there is undoubtedly an advantage to a crossbow in that particular case. The crossbow allows many more people who can’t hunt with a compound bow to get out in the woods.

When we look and focus at speed, there’s no doubt about it that the speed of the crossbow is going to win almost every time than the speed of a compound bow.

However, as we all know, a bow hunter’s speed isn’t what kills. Accuracy is what kills. As a result, to be a successful hunter, you must hit your prey precisely where you want it.

So when it comes to accuracy, which one of these weapons wins, ultimately, we believe that it’s a draw. Any one of these bows, whether a compound or a crossbow, is more than capable of being highly accurate in the hands of the right shooter. And we believe that is the most significant factor.

However, for one reason, we will give a slight nod to the crossbow in terms of general accuracy. And that is- a crossbow has fewer variables when you shoot it.

So because of the way that a crossbow is designed, you don’t have to worry about torque as you do with a compound bow when you pull the trigger back and then shoot it.

Besides, you don’t necessarily have to worry about things like cam timing and rest tuning and all these other things that you need to worry about to get the compound bow to shoot correctly.

So there are a few fewer variables in the crossbow. That is why you see hunters or even non-hunters being able to pick up a crossbow and shoot it very accurately in a concise period.

So we’ll give the slight nod to the crossbow in terms of ease of shooting. However, there’s no doubt that today’s modern compound bows shoot better than ever before.

Let’s talk about effective range in a bowhunting situation. Because we believe this is another common misconception that people have about the differences between a crossbow and a compound bow.

There’s no doubt about it that crossbows are undoubtedly capable of being extremely accurate at long ranges. But accuracy at long ranges can’t be interpreted as the ability to hunt with them at those ranges.

The reason for that is that regardless of how fast these weapons shoot, there are many variables in a hunting situation, such as the animal’s movement.

So, for the vast majority of people, hunting situations diminish your accuracy at those longer ranges. Overall, they’re not many differences between these weapons.

Hence, if you are going to go hunting with any of these weapons, you need to practice a lot. And that is the best way to ensure that you are going to be accurate in a high-pressure situation.

It makes no difference which of these weapons you use for shooting. If you are going out in the woods as a bowhunter or want to pursue practice to be very proficient, you can pick any of them according to your preference and convenience.

Yet, a common misconception about crossbows among people is that hunting with crossbows doesn’t need any practice, and you need to go out in the woods and start shooting arrows.

But, this doesn’t seem right yet. As a responsible and ethical sportsman, you should be practicing a lot with whatever weapon you choose for hunting.