How to Choose an Optical Sight: Every hunter, having passed the five-year path from smooth-bore to rifled weapons, is faced with the task of choosing an optical sight. This article offers all the main points that you should pay attention to when choosing a scope. 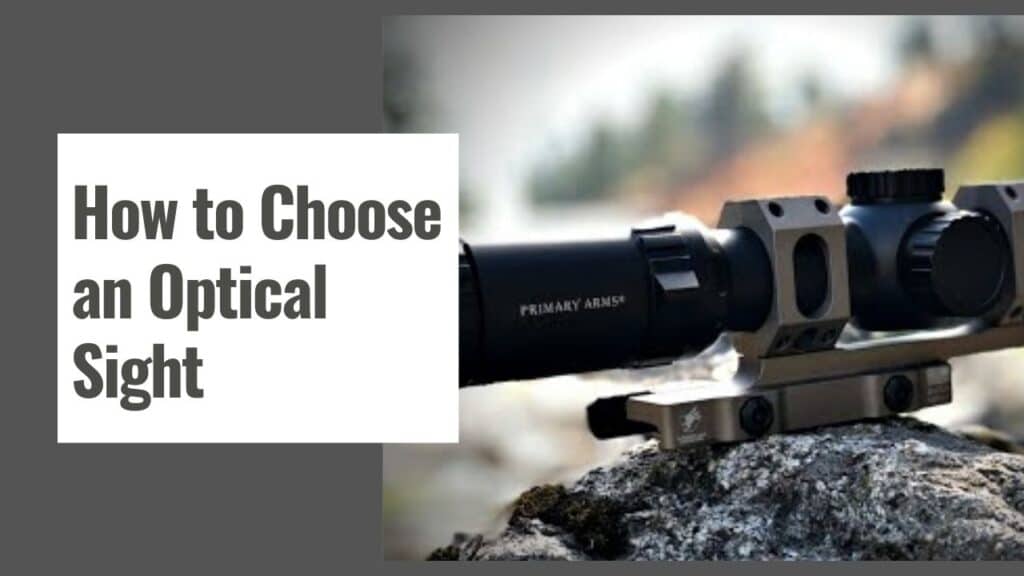 Choosing an Optical Sight by Parameters

The lens is the most important element in sight, usually consisting of two or more lenses. The main task is to collect light reflected from objects. From this, it turns out that the larger the lens diameter, the more light will enter the scope, which means that the image will be brighter. In almost all cases, the name of the device indicates the optical diameter of the objective.

If hunting at the twilight time is supposed to be, the best telescopic sight will have a wide lens diameter. Diameters from 50 mm are considered high values. On the other hand, the larger the diameter, the longer and heavier the scope, which in some situations, will complicate aiming, for example, in running hunting.

The concept of parallax adjustment is emphasized separately. Beams passing through the lens are focused on the plane where the reticle is located. The misalignment of planes is called parallax and looks like an indistinct image of the object, and for detuning on the sights, you can find the lens focusing mechanism.

In scopes, focusing is located on the lens in the form of a ring or on the center’s side. The mechanism’s lateral arrangement allows for more accurate focusing, and, as a rule, such scopes are more expensive. The type of focus can be indicated in the names.

If the sight does not have any of the presented types, then it is set at a certain distance. Most often, these are sights designed for shooting at a distance of up to 100 meters.

Must Read: The 10 Best Air Rifles for Hunting Small and Big Game

Magnification is a ratio of how many times an object’s size differs when viewed with the naked eye and through an optical sight. Like the lens diameter, magnification is indicated in the names. The sights are divided into two options – constant and variable magnification.

Constant magnification sights are more convenient to use for specific distances, and they are easier to handle and more reliable in design due to the lack of moving elements. Variable scopes are suitable for different distances depending on the zoom range. How to select the correct multiplicity can be found in the corresponding article.

3. Removal of the exit pupil

An eyepiece, like a lens, consists of multiple lenses. The optimal image is obtained by placing the eye at the optimal distance from the eyepiece’s outermost lens. The characteristic of removing the exit pupil indicates the convenience and safety of using the scope.

When fired, the recoil causes the scope to move towards the eye, and the higher the value of the exit pupil removal, the safer for the eye. If the eye is located closer or further, then black “moons” appear during viewing relative to the set value.

Modern sights have an offset in the range of 70-90 mm, which belongs to the safety class. But don’t underestimate the impact of recoil when choosing a scope for a Magnum class weapon.

Must Read: The 10 Best Single Pin Bow Sight for Hunting

Reticles are a separate topic in scope selection. Each manufacturer develops its own reticle options. The grids are divided into simplified hunting variations and tactical ones with a lot of marks.

The standard aiming reticle has horizontal and vertical guides, along which the shooter estimates the weapon’s blockage. For hunting, shooting is fundamentally fast, especially when the animal is moving.

Therefore, the aiming reticle of hunting scopes is a simplified view. There are grids with different line thicknesses or the presence in the center of a collimator mark in the form of a point or across, which is convenient to use when shooting at a moving target. When hunting long distances, bullet drop and crosswind corrected nets, such as Mil-Dot, are used. Examples of hunting nets:

The tactical reticle is used for accurate shooting at stationary targets. They are used to calculate the ballistic trajectory of a bullet, measure distances, and, as a rule, have a large number of corrective marks. Examples of tactical nets.

Grid backlighting is used to increase the visibility of lines or a central mark on a contrasting background or at dusk. Depending on the manufacturer, the backlight can be of different colors, but the common one is red.

For scopes of variable magnification, there is the concept of the reticle’s location in the first or second focal plane of the lens. For changing the magnification insight, the movable mechanism of the lens turning system is responsible.

If the reticle is located in the lens’s focus, which means in the first focal plane, then when the image is enlarged, the reticle also increases.

It turns out that the calculation of the distance is available for any multiplicity since the sect changes proportionally. When the reticle is positioned in the eyepiece’s focus, which means in the second focal plane, the reticle size does not change.

The first option is suitable for ballistic reticle and is used in expensive sights. Sights with a reticle arrangement in the second focal plane are cheaper to manufacture and are convenient for hunting tasks.

Must Read: The 10 Best Spotting Scope for Target Shooting

Optical sights are cylindrical in shape. To mount the scope, the use of landing rings is common, with the exception of sights with an integrated bracket or landing tire. A bracket is individually selected for each gun, but the following parameters are always taken into account:

When choosing an optical sight, pay attention to the features of the case. These include resistance to mechanical stress, protection against water ingress, the presence of inertial gases inside to prevent fogging during temperature extremes, a protective coating.

The drums for entering corrections, which can be open or closed, are considered separately. The closed type assumes the presence of protective covers to prevent accidental movement, which is mainly for using sights for hunting. The open type of drums implies frequent input of corrections, and latches are used to prevent shifting.

How to Choose an Optical Sight for Hunting

When hunting, there are no exact values ​​of distances to the target, in contrast to trap shooting. Aiming is complicated by the possible movement of a hunter or an animal. The higher the speed, the lower the fold you need to use. At low magnification, the wide field of view allows faster aiming with a lead.

For example, a sight for driven hunting should have a small magnification range. The beast moves quickly over short distances, so a wide-angle of view is the main factor. Sights up to 4 times have this, and the 1-4x “pen” is considered popular. Since driven hunting, according to the rules, is carried out only in the daytime, the lens’s wide diameter can be neglected.

During the running hunt, it is assumed that the hunter will move when tracking the animal. As in driven hunting, the increased insight needs to be selected as little as possible due to the difficulty of shooting from hands.

But some animals do not let the hunter get close, so the multiplicity is selected with the expectation of using it at short and medium distances. For such cases, it is more convenient to use fixed sights with a low magnification value, for example 4x, or variable type with a range from 1x-2x to 6x-8x. Optical sights for running hunting differ from driven ones also by the increased diameter of the objective, since shooting can be carried out at twilight.

High multiplicity values ​​are used in motionless hunts, for example, from an ambush. The hunter uses tripod and bipod supports to reduce vibrations. The selection of magnification depends on the distance, but it is common to use high values ​​up to 12x, 16x. To maintain aperture ratio at high magnifications, the sights have impressive lenses up to 50-60 mm in diameter.

Sights with magnification over 16x are used exclusively for mountain hunting. Mountain hunting involves shooting at a great distance from the beast, which requires serious preparation. Scopes are often chosen with up to 24x range and ballistic reticle.

Must Read: Learning How To Use A Scope For Long Range Shooting

The Best Riflescopes on the Market

Of course, riflescopes are divided into price classes, so we have selected in this section the best scopes for the hunter’s estimated budget.

Before choosing an optical sight, it is necessary to compare the estimated parameters and budget. For convenience, use the following list: