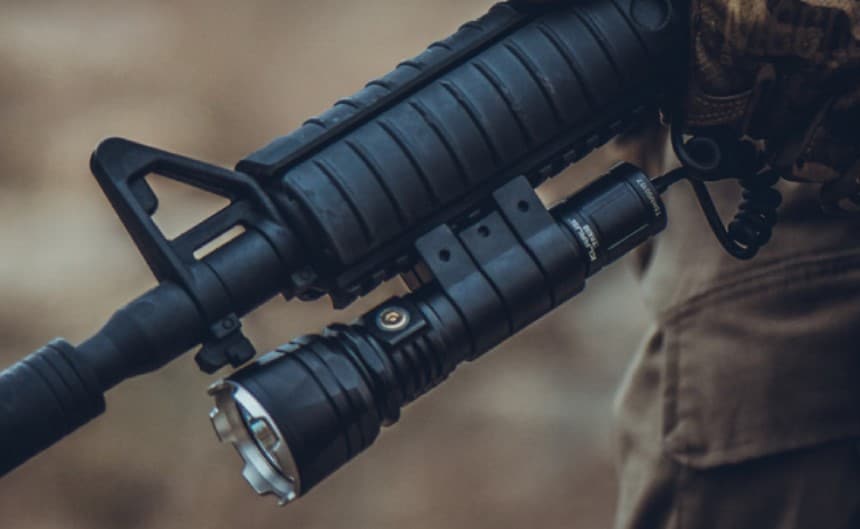 Basic Terms of Underbarrel Flashlight and Their Influence on The Choice

In the characteristics of lanterns, you can find terms, whose meanings have different meanings when choosing:

The luminous flux usually indicates the first parameter in lumens, which indicates the total amount of light emitted by the lantern.

It is a mistake to think that the luminous flux indicates the distance of the beam propagation, rather it is an indicator of the “power” of the lamp. Factors such as the focus of the beam, lens type, and reflector affect the illumination distance.

The type of source is often indicated together with the luminous flux value. In modern lanterns, LEDs are installed more powerful and resistant to frost and moisture than incandescent lamps.

This is an important factor when choosing a hunting flashlight, as it will often be used in wet conditions. LED sources do not give heat, which means that the lens will not crack at temperature changes.

You Should Also Read: How to Choose a Night Vision Scope

Light range is the characteristic that hunters often pay attention to. It is worth evaluating the range parameter based on the illumination because the flashlight can be seen at long distances, at which the hunter cannot distinguish the target.

This should be taken into account since you can accidentally frighten off the beast when working with a long-range flashlight and will not approach a sufficient distance for a shot.

OTF characteristics and peak luminous intensity refer to standardized ANSI parameters and represent the luminous flux at the exit of the lens and the intensity’s value at the point of maximum illumination of the lamp.

These characteristics are not so important when choosing. Therefore many manufacturers do not indicate them.

One of the important characteristics is the angle of divergence of the beam or light spot, indicated in degrees or meters at 100 meters.

This is due to the propagation of light and reflection from the reflector. There are lanterns with a special lens shape, in which the side spot is hardly distinguishable.

You Should Also Read: When Does Coyote Season Start?

The power consumption of the flashlight will be important. The higher the luminous flux, the more the lamp consumes.

To save power, most models have several lighting modes. When choosing a flashlight for long-term use, consider options with more hours of operation.

Handlamps are used in many areas, including hunting. Differences between a hunting flashlight and others:

The Presence of Amount for Weapons

The name of the under-barrel lights implies installation on the barrel. The flashlight must be mounted on the body, or the standard tube diameter is 25.4 mm.

The flashlight is located on the weapon, so the way it is turned on and off is important. The tactical button assumes the flashlight’s constant operation, the remote button – power supply only when held.

Increased Resistance to Impact and Recoil

In addition to difficult weather conditions, the flashlight must withstand the recoil of the gun.

Beam focusing is used in tourist flashlights, and when hunting, fast aiming at short distances is important without additional settings.

Additionally, it is worth highlighting a variety of tactical laser-type flashlights or laser flashlights. The emitter, as the name implies, is a laser, predominantly green. The luminescence range is significantly higher than diode lamps since the laser beam has a higher reflectance value.

The flow of particles can be adjusted, and the beam can be adjusted to a point, similar to laser designators, and due to direct propagation, there is no side spot.

Laser flashlights are most often used in tandem with optical daytime sights. The green light is less susceptible to animals and can be used continuously in comparison with LED lights.

You Should Also Read: The 10 Best Night Vision Binoculars for Hunting

How to Use the Flashlight When Hunting

When hunting at night, the under-barrel flashlight is not necessarily used as a path illumination, as the visible beam of light can frighten the animal away. The application is related to the blinding property.

Hearing a rustle, the hunter aims his gun in the direction of the sound and sharp turns on the flashlight.

The blinded animal stands motionless for several seconds, but this is enough to make a shot. In this case, it is convenient to use the remote button, which is located under the forend.

The flashlight work will be provided only when the button is held down to turn on and off the flashlight quickly.

Despite the possibility of the flashlight “hitting” at long distances, the recommended shooting distance for night hunting does not exceed 100 meters, so as not to miss the wounded animal.

The use of an underbarrel flashlight is popular due to the device’s low cost, in contrast to expensive night vision devices.

How to Mount an Underbarrel Flashlight

The underbarrel lights can be divided into two types according to the type of attachment – with an integrated bracket for the Weaver rail and with a seat. The lantern seat is often a cylindrical shape with a cross-sectional diameter of 25.4 mm (1 inch).

It is possible to mount the underbarrel lamp without an integrated bracket in one of two ways: Create a Weaver landing strip on the weapon using the appropriate brackets and install the ring’s lantern. Using the X-shaped bracket, we simultaneously clam.