Basics of Airsoft Tactics: Airsoft is a command military tactical game. In this article, we will look at the basics of airsoft tactics, so to speak, the basics.

The material is aimed at new players – after all, knowing the basics will allow you to act on the battlefield in a meaningful and more effective way, which means that the fighter will not be a burden, but one of the team’s screws that can influence the course of the game. 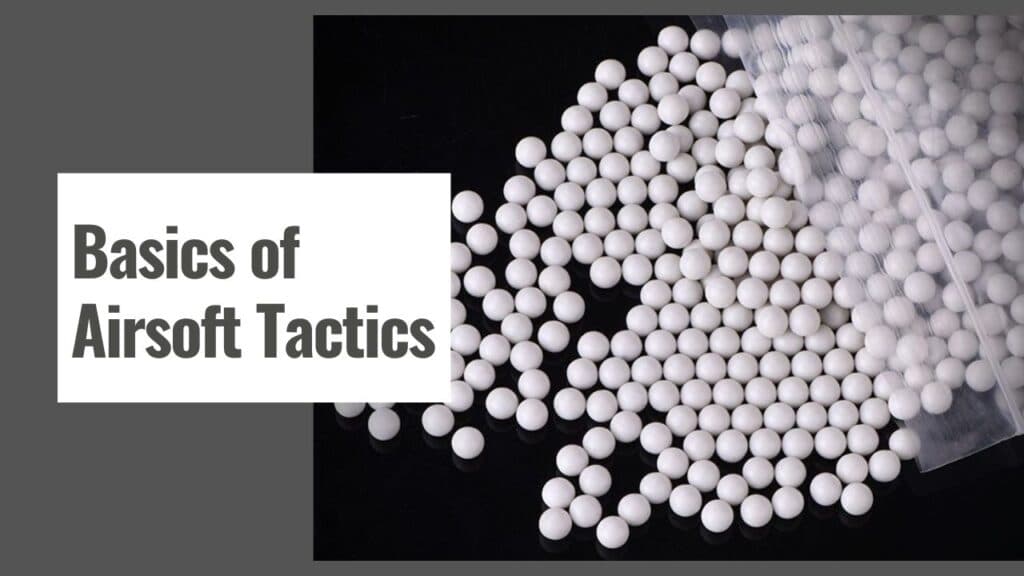 Personal Training of an Airsoft Player

Despite the fact that airsoft is just a game (albeit close to reality), you still need to have some stamina and physical data in order to be successful during the day phase, which lasts from 3 to 6 hours.

This is the duration of the “resurrection” or classic scenario game. Do not forget that you will need to move in equipment and with a game “weapon,” which is plus 8-15 kilograms to your weight. Short but quick runs from cover to cover will alternate with marches on foot, defense of positions, and other fun activities.

What do you need to be able to do? Normal physical training: jogging for 1-2 km., Pulling up 3-5 times on the horizontal bar, 20-30 squats, 20-30 push-ups. If you cope with such training, then there should be no difficulties with resurrection. Quite enough for a start, we will not talk about the limits.

Be sure to read the editions of the airsoft rules according to which the game is played. Without this knowledge, you shouldn’t go to the event at all. Basically, all editions of the rules are similar to each other. Still, depending on the region and the organizer, they may differ in terms of tolerances for tuning and other points.

You must be prepared to confess against any hit on you. This is perhaps the most important point. And psychologically, not everyone is ready for this.

The ball flew in at the end, or it is not clear from where, the grenade exploded nearby, but nothing hit you – you need to admit yourself “dead” under any circumstances, even if you go far into the “ghoul,” or it seems to you that no one has seen the hit.

Airsoft is a fair game. And it is not so important that cheating is punishable, how important is the moment that the meaning of the game is lost, and the impression for other players is spoiled.

The outcome of the Battle of Good and Evil (or a beaver with a donkey) does not depend on the result of the game, so you need to confess with a light heart and a clear conscience.

You need to have a cold head and a warm heart. Do not get lost in emotions, quickly assess the situation, make a decision, avoid conflicts with other players, and have initiative.

Do not be afraid to ask questions, participate in the discussion of the plan, express your ideas for teamwork, and take command on the battlefield. Inaction leads to defeat, and initiative can turn the tide of any “battle.” Surely you will not lose anything in the course of the game, but on the contrary – at least you will gain experience.

Let’s consider a variant designed for a daytime phase up to 6 hours – this is how long a classic scenario game can last. A recommended minimum list of equipment for an airsoft player:

With such equipment, you will be able to operate on the vast majority of Sunday games and in almost any condition effectively. With a 120 m/assault rifle, you don’t need a spare “barrel” to play in buildings, and a bunker store is enough to get you started. It is only later that you will be overgrown with mechas and other cool equipment. But that’s all later.

Be sure to fully equip yourself before the game, adjust your equipment, and try to move around in it. Think about how to adjust the unloading and how to place the pouches on the body so that it is convenient for you to operate.

Now that we have figured out what you need to come with let’s take a closer look at how to act in a “combat” situation.

Very often, both experienced and new players do not attach due importance to the briefing from the organizers and listen half-heartedly.

In the pre-game construction, the master brings important information that concerns the rules of the event, safety measures, the boundaries of the training ground, and, most importantly, communicates the scenario’s mechanics to the participants.

We recommend that you take the briefing as seriously as possible, listen carefully, and immediately ask questions if they arise.

So you will always be aware of the script’s tasks, where the ghoul is, and what you definitely cannot do. This knowledge will definitely be useful to you. There is even a saying that “Only cheaters read the rules” – but this is actually just a sad joke about most players’ attentiveness.

The second important part is the side command briefing. When the participants are deployed to their starting points, depending on the party’s size, the unit commanders or all players will take part in this briefing.

Here, issues of general strategy, specific tactical maneuvers are resolved, radiofrequency, and other important issues of the side’s behavior on the “battlefield” are determined. It is imperative to understand the general concept and tasks of you or your unit. This will make the game meaningful and help you achieve the most effective actions, which is the key to victory.

The next step is teamwork. Only coordinated actions of the side can lead to victory, and they will be possible only when all units of the side understand what is happening, keep in touch with each other and quickly change tactics depending on the situation.

To begin with, you must understand your role in the overall scheme. Either you are a saboteur with a personal task from the commander of the side, or you are acting as part of two or three players or a fighter of a unit with a commander at the head.

If you came to the game alone, be sure to approach the side commander so that he assigns you to the unit. You can also join a team or group of players on your own by just getting to know them. Airsoft players are friendly people and don’t bite. Newcomers are welcome here.

Once in the unit, carefully listen to the plan of action from the commander, ask questions.

Having clarified the above questions, get a game card, if any, or study the command card, remembering the main landmarks.

During the game, always stick to the squad, do not lag behind, and do not clump together to create a group target. Maintain eye contact with the fighter closest to you and listen to introductions from the team leader.

Successful interaction in a detachment means being on the alert, responding to orders and changes in the situation in time, keeping in touch, briefly and clearly reporting changes in your sector of responsibility, at any time to understand the task of the unit and your own in particular.

A very important nuance – after the game “death” and the first trip to the “ghoul,” interaction and coherence often go to hell because players instead of looking for their unit are nailed to another group. The first thing to do after leaving the “ghoul” is to contact your immediate commander, request instructions, and find your squad as soon as possible.

Let’s move on to specific actions in the battle. Of course, we will not consider such nuances as with what grip to hold the machine gun and how best to go into the roll. But let’s touch on general questions that will be useful in the vast majority of situations.

A walkie-talkie is just a must-have for any player. Without a walkie-talkie, you are not in control of the situation, you cannot communicate anything, and they cannot convey anything to you, except with a messenger or pigeon mail.

In order for the radio broadcast not to be a continuous booth and does not cause a desire to turn off the radio, you must follow simple rules:

And to conclude this section with a few more tips:

These tips are the basics of airsoft tactics that we suggest that new players learn first. We hope that the tips will be useful to you in the game. Play fair, act intelligently, work as a team, and airsoft will bring you only positive emotions and new experience. Good luck with your games!