Where to Shoot a Bear with a Bow: Bears are always hard to catch. So, it’s essential to get prepared with the proper knowledge and equipment for bear hunting. However, you can shoot bears with both arrows and guns. Still, it is essential to have the right plan to hunt bears effectively because the key to a successful hunt is identifying the animal’s weak point and attacking it.

Especially if you’re hunting a bear, it’s vital to hit it in the right spot. Otherwise, you’re going to face risks. Therefore, today here we will discuss the shot placement of bear hunting. So, without further ado, let’s go to the discussion. 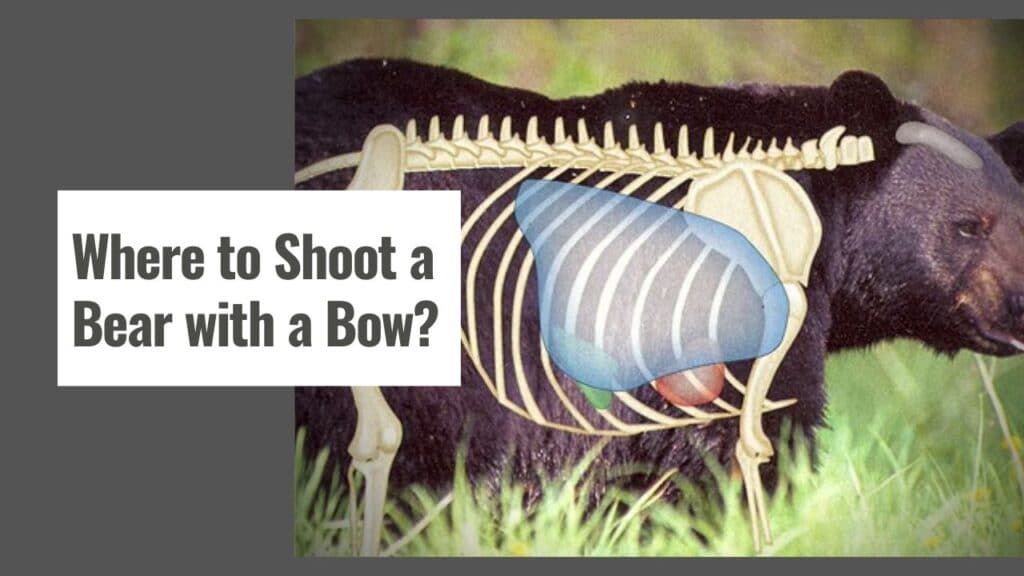 Where Do You Aim to Shoot a Bear?

First, keep in mind that a bear’s lung or heart is positioned underneath the chest than a deer’s, so you should aim lower. Divide the chest of a broadside bear into thirds and target the lower two-thirds of the chest with your broadhead.

That front leg should appear slightly forward on a broadside bear, allowing you to position the broadhead directly behind the front leg in the crease.

An 8″ circle behind the front shoulder when hunting a bear is the most vital area to strike. It would be best to tuck in close to the front leg without striking against a leg bone that is stout and thick like the iron pipe. 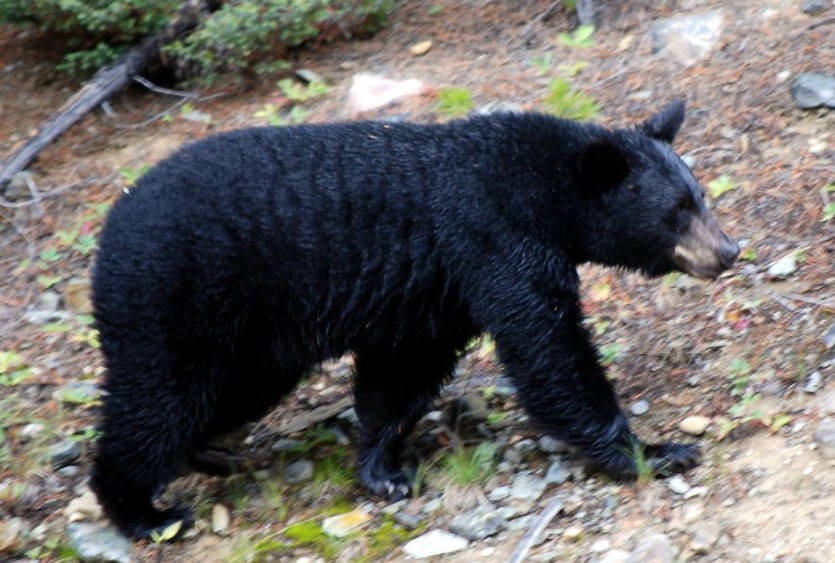 Besides, during the initial stages of your attack, you need to be close enough to strike, but you must avoid striking the bear’s legs. Therefore, you have to hold the arrow as tightly as possible against the bowstring without actually touching it.

Read Also – What Do You Need to Start Shooting a Bow?

When the bear is quartering away from you, you should be aiming for an imaginary line across the bear’s off-side front leg. There is undoubtedly the best chance to get a solid hit through both lungs if you do so.

Additionally, if the bear is quartering away from you at a steep angle, don’t attempt a quartering-away shot. If you attack the bear’s hindquarters, you run the risk of losing the bear.

Because it needs to pass through a large portion of the digestive tract before reaching the lungs, that is a lot to expect from any arrow. If it lacks the energy to survive, the bear will almost certainly die, but your recovery chances are small. 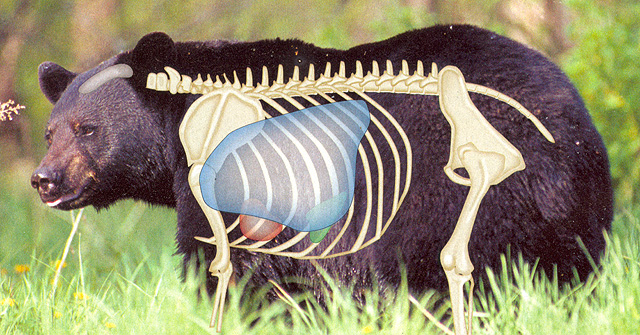 However, black bears were more broadside than quartering and within close range. You must shoot at the section of the bear’s body closest to the scapula to ensure a kill shot.

However, if you are a beginner, it is better not to take shots at bears that are quartering away from you, as the bear’s body will obscure the vital organs. Also, don’t shoot bears that are facing toward you. It’s just too risky.

Do not follow the previous method if a bear stands on his hind legs and looks directly at you. In this case, shoot the bear in the chest on the right side.

Aim for the intersection of two imaginary horizontal lines, one of which passes straight through the middle of the bear’s chest, and the other crosses at the shoulder sockets to hit the bear’s chest.

Hunters will need to use a few items to pull this trick off, such as a high-quality lightweight broadhead (either fixed or replaceable blade) that is sharp and durable. It may look like an unlikely shot at first, but it can be pretty effective to deliver the kill.

They’ll almost certainly position themselves for the perfect shot, remaining motionless long enough and allowing you to take a perfect shot.

Once you’ve done, then maintain silence and avoid moving. Allow the bear to flee and pay close attention to hear whether you can hear it fall. If you are ever in doubt about the shot, wait at least an hour before following up. 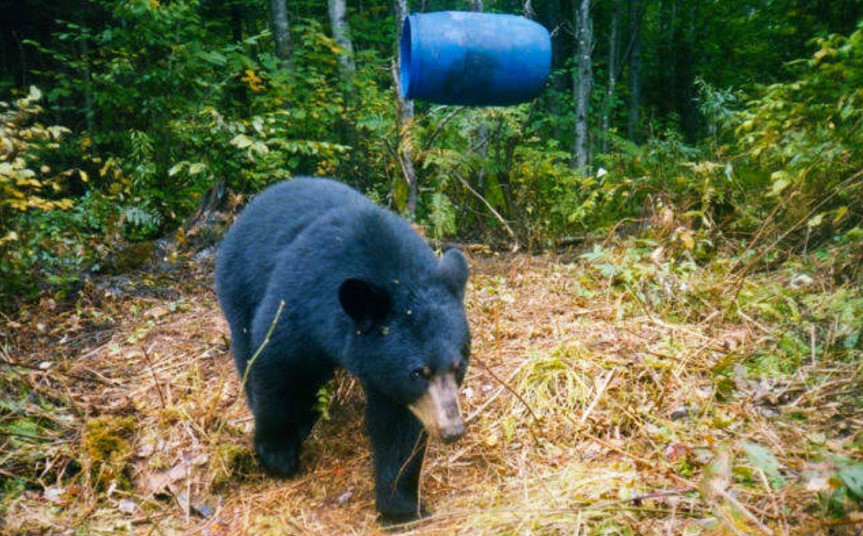 Once you are close enough to a bear to take a shot, you need to have the ability to land a great shot. Here many new bear hunters apply shot placement and tactics acquired via deer hunting experience.

But bear anatomy is slightly different. They are powerful, and they usually respond by attacking back when they are being attacked.

Therefore, to avoid any uncertain danger and get a perfect shot placement on the bear, here are five tips for shooting a bear with a bow.

Most of the time bears appear to be on the move, particularly when hunting them over bait. You never know what is going to happen after that. When bear hunters see a bear move, they’re often tempted to shoot too quickly.

And hurry only causes mistakes. So, if you’re attempting to take down a bear, be patient and wait for an opportunity to shoot them when one is in range. Again, they may be in an unsuitable position.

In this situation, you should wait until they are broadside. Especially if you are using a bow, you should aim for the double lung hit.

During hunting bears, the higher chance for a pass-through shot arises while the bear is broadside. If a bear is quartering at a steep angle, you will not get a pass-through.

If you are patient enough to wait for a broadside shot, you will almost definitely retrieve the bear within 30 minutes of shooting it.

3. Middle of the Middle

If the statement is taken too seriously, you would be shooting directly towards the back edge of the liver and lungs. We’d want to add a slight change: “middle of the middle, then back a few inches toward the shoulder.”

When targeting the center mass of the body cavity, hunters like to shoot broadside bears from 4 to 5 inches back from the shoulder.

Though bears have soft skin and relatively light rib bones, the front shoulder is the most critical area to penetration. So, try to avoid it at all costs.

Read Also – How to Choose the Right Bow?

Aiming at the middle mass of the animal is especially important when you’re hunting a bear. But the bears are frequently not as giant as they appear due to the hair and fat covering their body.

Thus, aiming low is not always appropriate and may be counterproductive to bear hunting. If you aim for its fur and fat, your possibility of getting success will be less.

Again, bears frequently have a thick layer of fat around their belly. And so, a low-hit bear may frequently bleed profusely for an extended length of time until the blood becomes watery and eventually disappears.

When the black bear is in the shadows, it’s hard to see its form or body parts. The key to a successful bear hunt is patient enough not to shoot too early in this situation.

Take a few seconds to observe the bear without the scope, then go back to the scope. After a few repetitions, you’re more confident and will be able to spot the target. It’s so close that it’s hard to overlook.

Always remember that bears are three-dimensional creatures and not targets like paper. If you shoot downward at a target rather than horizontally, your point of aim has to be lower than your planned contact point.

Therefore, your point of aim will need to be lower than your intended point of impact. Also, don’t ever take a shot you’re not 100% sure of. If anything complicates the shot, like bushes or brush or another animal, you might want to wait. 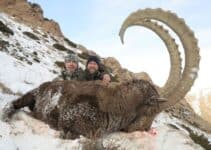